Well it’s time I cover the last great debate in sports. Okay I’m kidding there are thousands of great debates but this one is personal for me.

I’ll tell you right now, I’m a Cavs fan. When LeBron James was drafted to the Cavaliers in 2003, my Uncle looked at me and told me “this guy is the next Michael Jordan.” I was seven when he told me that, and 14 years later I realized, he was right and wrong all at once. And-in all reality-that’s when my sports fandom started, I’ve grown up following LeBron’s career, I was 10 wearing his jersey watching him battle the Celtics to when I was 13 and I was burning his jersey because he was taking his talents to South Beach.

Flipside of that I have no love for the Chicago Bulls. I respect what Jordan and Pippen did for the game of basketball, but to be honest I didn’t see get to see what they did first hand. I’ve seen highlights and I’ve watched my fair share of old games but I doubt it does any of his accomplishment justice.

The fact is, LeBron James IS our generation’s Michael Jordan,  whether James was a Cavalier or a Heat. From being swept by the Spurs in his first finals appearance to leading one of the greatest comebacks in sports history, on being on the only team to ever comeback from a 3-1 deficit in the NBA Finals, LeBron James is greatness personified whether you like him or not. And-please for my sanity, don’t bring up Kobe Bryant! I swear I’ll freak out. Kobe has three rings because of Shaq and two that I’ll give him credit for (even though he played a Dwight Howard led Magic team in one of those).

Now let me address the knocks against Lebron first.

So this picture explains where both guys were at when they were 31. via CBSSPORTS 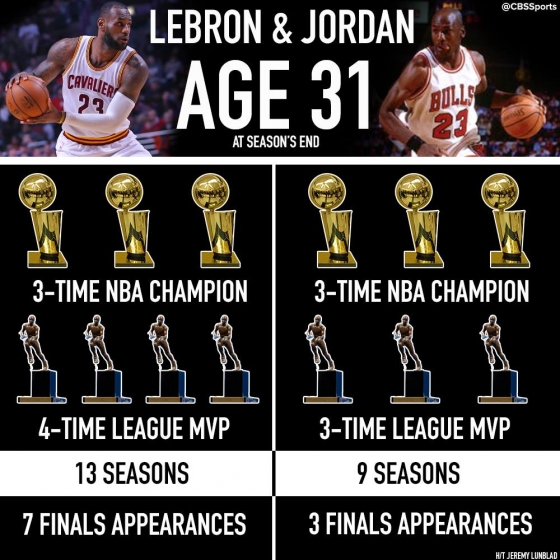 People want to act like Jordan is miles ahead of LeBron, and they want to act like this conversation is ridiculous. The fact is, at the same age LeBron James has done more than Jordan, not to mention the extra four final appearances. LeBron James isn’t the scorer that Jordan was; Jordan scored 32,292 points in his career. While LeBron in 13 seasons is at 28,316 since James is not slowing down in the near future, it’s not out of the realm of possibility that he could pass Jordan in scoring. James leads Jordan in total assists and total rebounds, and he leads in field goal percentage and three point percentage.

The argument for LeBron is this: he’s the better team player. You take LeBron off of the Cavs, and they go back to being sub .500. In Cleveland’s first season without LeBron, they went from 61-21 to 19-63. In Michael Jordan’s last season with the Bulls before his first retirement, they had a record of 57-25, but in the next season without Jordan, the Bulls were led by Scottie Pippen and went 55-27. No drop off. Jordan was about Jordan, LeBron was about the team.

Now to be honest I don’t have some sympathetic anecdote for Jordan, I was 6 when he called it quits. I was too young to really witness the greatness that is Michael Jordan, I didn’t get to watch him dethrone the Bad Boy Pistons, I didn’t see him make the shot, I didn’t get to witness the flu game. Jordan had a career that-even though I missed it-I still know about his greatness. There’s one thing that Jordan’s legacy reminds us: whether you watched him or not, you knew who he was. The man led a rag tag group of Looney Tunes to victory over the Monstars and while I know that was fake, it shows that Jordan is an icon that will stand the test of time, he is Air Jordan.

I can’t lie, Jordan’s list won’t be as long as LeBron’s was. I kind of stated above that Jordan was before my time, but his highlight videos are everywhere so for some of you who haven’t seen him either check this out.

Michael Jordan has six rings and if he didn’t take a year and a half off he could potentially have another two. Jordan matched those rings with six final MVP awards and five regular season MVP awards, not to mention he was also defensive player of the year once. Jordan scored 32,292 points in his career, he averaged 30.1 points per game through out his career, in 1989 he averaged 37.1 point per game, in the playoffs Jordan averaged 33.4 points per game.

Jordan was a winner, he would do/say anything to win, but when you focus on Jordan it’s a singular view. Jordan played for Jordan and he had insatiable appetite for winning. His teammates fed off of that, and don’t-get me wrong-that’s not a bad thing but when you think about the Chicago Bulls you’ll always think about Michael Jordan, not Scottie Pippen, not Dennis Rodman, Not Horace Grant, not Steve Kerr, and not any Bulls player after the year 2000.

I would list the knocks on Michael Jordan but I actually don’t know any. You hear about how he wasn’t a great teammate but the man was a winner and that’s documented.

There’s an old pro wrestler who used to say “To be the man, you’ve gotta beat the man” and LeBron James has yet to do that. James is a better teammate, Jordan is a better scorer. Jordan has six rings, Lebron has three rings. This is an argument that is still hard to gauge considering the fact that James is still playing and this season is one of his best yet. There’s no decision yet, yeah as of right now Jordan is still in the lead, but the King is closing the distance and he’s doing it quickly.

View all posts by gideyndemars

1 thought on “LeBron vs Jordan”